morning. i crack my eyes open a bit and search around for the sound coming from somewhere under my pillow or perhaps under the blankets.  it's my alarm clock (actually it's my old flip phone which has a wickedly loud alarm setting on it!).  i've disable the snooze so i must get up when it goes off.  no slapping the button and grabbing another 5/10/15 minutes.

the first thing i do is take my thyroid pill.  the pills and a bottle of water are on my night table.  this is a new habit i am trying to establish.  in the past, i just took the pills(there are more than my thyroid meds in the morning) with my coffee and sometimes breakfast.  that is until a few weeks ago when my endo's wonderful nurse/assistant informed me that in order for the thyroid medication to work to its full potential, i should be taking it at the same time each day, with lots of water, on an empty stomach at least 1/2 an hour before any food or dairy products.  hmmmm....perhaps that is why they weren't really working for me?

now after taking it, my next 1/2 hour is spent showering and such, making the bed, sorting out laundry, emptying the dishwasher (or starting it!), whatever needs doing to waste at least that 1/2 hour.

i go back for more lab work in a couple months so hopefully this new routine will show an improvement in my thyroid levels! (i say this with fingers crossed!)

after my 1/2 hour of doing whatever needs doing,  i welcome the dynamic duo. 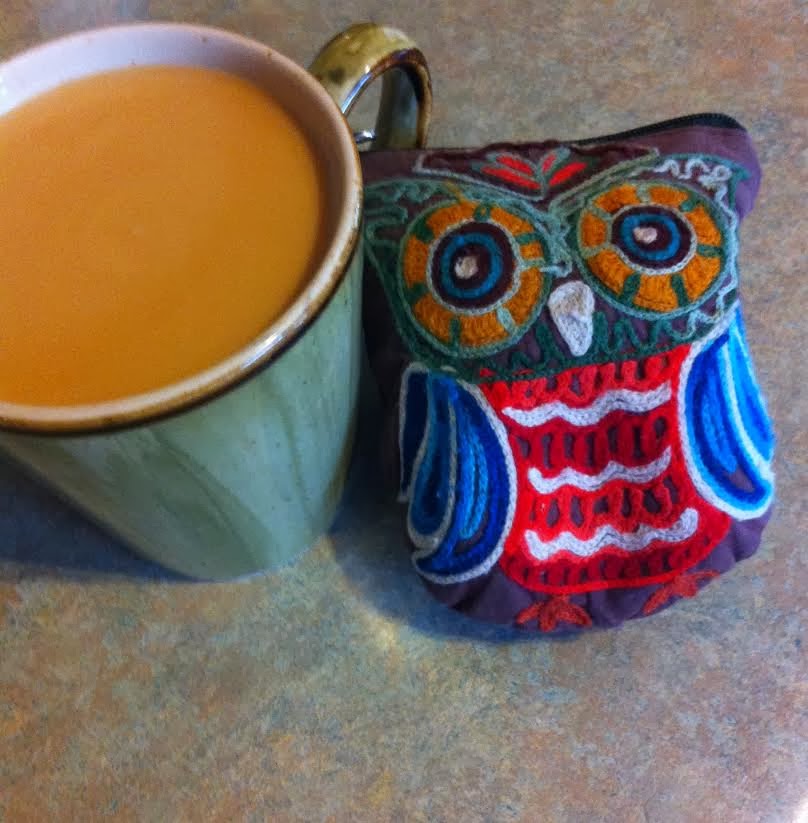 coffee is THE most important thing in the morning next to insulin of course! they go together like.......well

before i actually drink the coffee i've started another new habit.  each and every morning, before i test my blood, i insert a new lancet into my device.  i know right?  i am finding that if i keep a weeks worth in my little owl case (this is where meter and test strips live.  cute isn't he?), then its easy to remember to just change it every single morning.  my fingers are very thankful for this new habit!  i am less likely to have to poke myself numerous times to get enough blood.  it's amazing!

i'm thinking about starting on a few more new habits, but i want to make sure these two are firmly established before i tackle the next few.  i'll let you know how i'm making out!

a cure for my breakdowns

Have I mentioned that 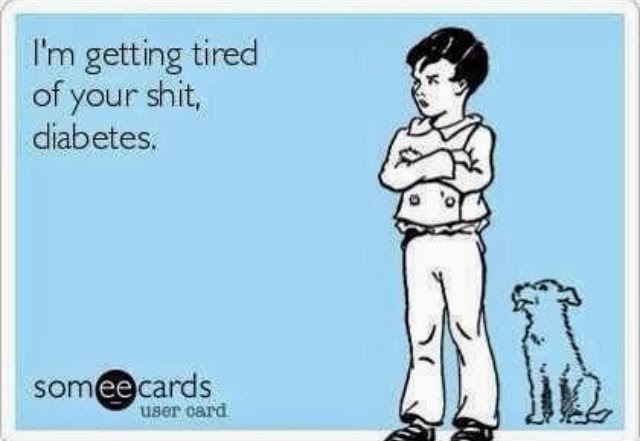 Woke up this morning with a BG of 30.4
Had a night filled with incredibly painful leg cramps.  Lots of jumping out of bed trying to flatten my foot to the floor.  The weird thing is that the cramp is in my calf, behind my knee or running down the front of my shin. Talk about irritating. And it's not just one leg.  It seems to go from one  to the other or sometimes both at once.  Now there's a picture.  Me trying to flatten both feet on the floor at the same time, in the dark while grasping onto the closet door handle for support!

Unfortunately, at some point whilst flinging the blankets off of me and jumping out of bed, I must have dislodged my site because i found it laying on the bed beside me this morning happily delivering insulin into my mattress.

Lack of sleep along with lack of insulin will make me a tad ugly in the morning.

And so before my morning coffee, there I was in my kitchen doing a site change. I was due for one anyway.  My only wish was that I had a syringe on hand (note to self - pick up some after work this evening), then I could have injected my huge correction and had a bot-free shower! Alas that did not happen.

Part of my routine in site changes has always included cleaning my skin with an alcohol wipe (even if I just showered lol).  Now this routine also includes spraying my skin with Benadryl. 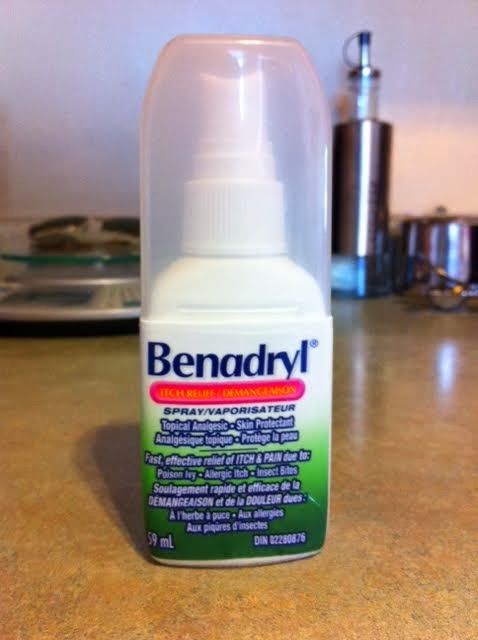 The reason for this is because if I don't my skin will start to breakdown.  It will get all itchy to start with, then a blister will form that will continue to itch like crazy.  When I try to pull the site, the skin will break and ooze.  Not a pretty picture, sorry.  This will take days to heal, itching the whole time.  Then I will be left with a lovely scar that takes months to disappear!

So Benadryl is the cure for my breakdown.  Not sure where I read about it.  Likely somewhere on the DOC.  Whomever you are, I seriously thank you!
I just spray this on my skin before inserting.  It forms a lovely barrier and voila!  No more itchy, blistery skin! (it also helps sites stick better!)

If you suffer from the same fate with your sites(and your poor skin), I highly recommend this stuff!

Happy Blue Friday and have an awesome weekend everyone!

Things that have been going on

Hope all is well with everyone.

February is just about over.  It's been a month filled with appointments for me.  5 to be exact!
They actually began at the end of last month.  January ended with an endo appointment.

Now I know that some D-peeps get really nervous when it comes to going to see their endo.  I don't.  I actually really like mine.  He's got a very dry sense of humour and he is quick to congratulate me on my "hard work" keeping things "steady".

This appointment, in my mind, was going to have little to do with diabetes, as i felt things were pretty standard.  Nothing too exciting.  No frightening lows, or drastic highs (at least not too many).  To my surprise, the whole appointment was about Diabetes (and things that seem to go with it!).

My main concern was discussing my thyroid.  I have been on medication for an under-active thyroid for quite a few years.  Lately I have been feeling more tired than usual.  I mean the I could have a nap at 10am, and another at 2pm and another at 7pm kind of tired.  Exhausted might be a good word for how I've been feeling.  I have zero energy.  I thought perhaps I needed an adjustment in the thyroid meds.

I'd had my lab work done and so I asked about the results of the THS test.  The results were a little higher than they should be, but not as high as they were when I was started on Eltroxin.  So what does that mean?  It means that my meds have changed.  I am now on Synthroid and have to go back in 3 months for more bloodwork.  This time they will look at THS as well as Free T3 and Free T4.

I've begun taking the pill as soon as my husbands alarm goes off (5am), so that I don't get tempted to eat breakfast or have a coffee right away (i get to go back to sleep for an hour).  You should wait at least 30min before consuming any food or calcium when taking thyroid medication.  I'm still a little tired but seem to have more energy, and that's a good thing.

The other thing we talked about was how my guts were feeling.  Was I suffering from constipation, or feeling bloated?  Did I ever have diarrhea?   Where was this going I wondered.  Turns out it had to do with gluten sensitivity and celiac disease.  I had mentioned that it seemed my BG's were better when I ate low carb (no shit sherlock!), and that a lot of the bread recipes found in the Wheat Belly Cookbook were low carb.  I love bagels and english muffins but morning and carbs work against me!

Anyway, I am now having blood work done to check for Celiac.  Apparently not uncommon in Type 1 diabetics.  I was told the test costs $65.00 (not covered by OHIP) but the lab I called said $125.00.  I complained to the ladies at the DEC (see below), and they told me that the hospital lab does the test and they don't charge anything.  I just need a new req. form which they will get signed by me endo.

We also decided that I would try out a blind CGM trial.  What that means is that I wear the sensor but I cannot see the data.  It would be downloaded after a 7 day run.  So my first appointment in February was with my Diabetic Education Team.  Jenn (one of the awesome women on the team) inserted the sensor.  It didn't hurt at all!  Then I went home and did my thing for 7 days.  I thought it would be a nuisance wearing another robot part, but in truth I hardly noticed it.

So after 7 days, I went back to the clinic to have the sensor removed and the information downloaded.
Here is what the seven day graph looked like.

So after trying to decipher this ****load of information, we made a few changes to my basals, my ISF, and I:C ratios.

I wish I had a Dexcom.  Unfortunately my insurance doesn't cover them, so I have a lot of advocating ahead of me!!

I also saw my Opthamologist this month.  Had my pupils dilated yet again.  Every 6 months.  Actually I had a laser treatment in October so this was a follow-up.  Things look great so I go back in August!

Today was the Dentist and the Foot Clinic.  No cavities, nice clean teeth, and super soft-as-a-babies-bum feet!

Thus ends my month of appointments.

I'm sure March will have a couple depending on the results of the bloodwork for Celiac.  I'll keep you posted.

For the rest of the month I'll be praying for spring to arrive!!!
Posted by kim at KD at 4:31 pm 3 comments:

"As one goes through life one learns, that if you don't paddle your own canoe, you don't move" - Katherine Hepburn

a little about me

kim at KD
i have been diabetic for 39yrs, have 3 kids, 2 grandkids, a wonderful husband (my highschool sweetheart!) and a very busy life.

I am not a nurse, doctor or Diabetes Educator. My diabetes is my own, and nothing stated in this blog should be taken as medical advice. If you have questions related to your own or someone you knows diabetes, discuss it with a certified Medical Doctor.
If I happen to make you laugh, great! Please, leave comments and come back often!! 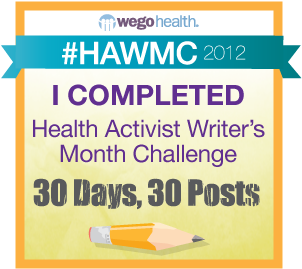 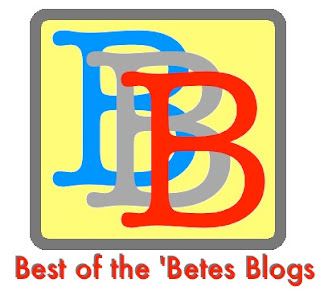 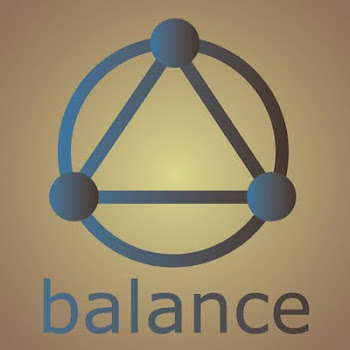